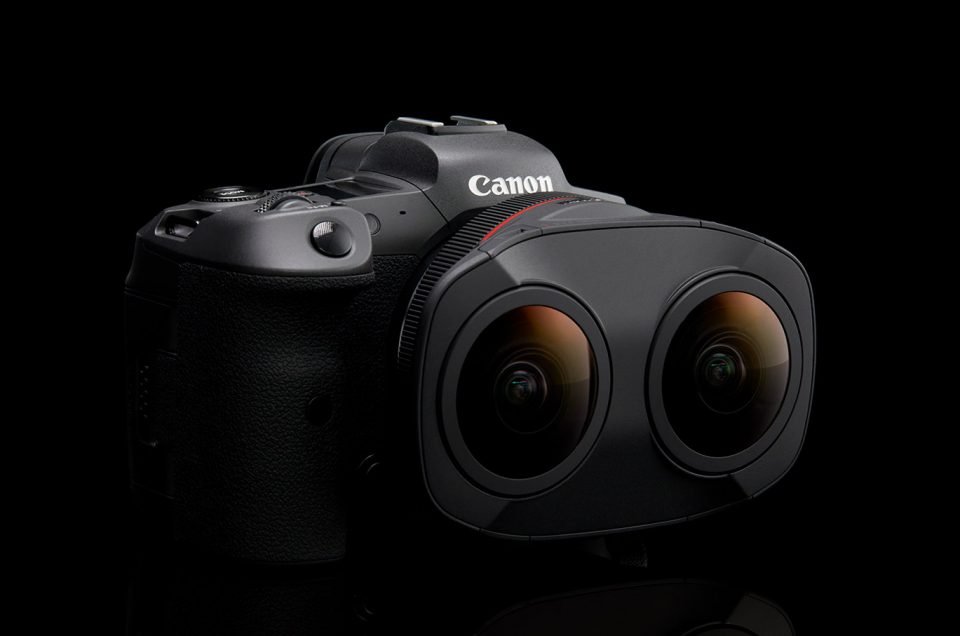 Canon has just announced the unique looking RF 5.2mm f/2.8L Dual Fisheye lens that is capable of capturing stereoscopic 3D 180° virtual reality (VR) to a single image sensor, and outputting it to a single image file.

The new lens is part of what Canon is calling the EOS VR system which is comprised of the lens, the EOS R5 camera and a new, paid, subscription-based software (EOS VR Utility or EOS VR plug-in for Adobe Premiere Pro) which is still in development.

When paired with the EOS R5 camera (updated to the yet to be released firmware 1.5.0 or higher) the lens will allow users to create “immersive 3D visuals that can be experienced when viewed on compatible head mount displays including the Oculus Quest 2 and more.”

The lens itself features two identical, L-series fisheye lenses creating a 190° field of view and an interpupillary distance (the spacing between the left and right lens centres) of 60mm which closely resembles human vision with a natural parallax.

The RF 5.2mm features 12 lens elements in 10 groups, with two UD (Ultra-low Dispersion glass) elements and prisms in both the Left and Right lenses.

It also features Dual-synchronized Electro-magnetic Diaphragm (EMD) with each of the left and right fisheye lenses have their own optical system, including separate — but coordinated — aperture mechanisms allowing for seamless and simultaneous control of the exposure of both lenses.

There is also coordinated manual focusing of both lenses allowing users to focus each lens using the manual focus ring.

It also features a Left-Right focus difference adjustment dial to allowing users to refine focus of the right lens separately from the left lens by using the included hexagon wrench.

The new camera firmware will add special features designed to optimize VR shooting as well as provide enhanced metadata information that will allow the software to convert the image from fisheye to equirectangular.

It will also enable a “Magic Window” on-screen overlay, that assists in framing the central resting position which shows an approximate field of view in the composition.

Users will also be able to magnify at 6x and 15x magnification and then use MF Peaking while magnified (a first for Canon EOS cameras) as well as swap between the left and right lenses with a simple tap of the [INFO] button while magnified. Especially useful when manually focusing.

When paired with the EOS R5 camera recording at up to 8K DCI 30p equivalent resolution with 10-bit colour depth when Canon Log or Canon Log 3 is also enabled.

The standalone EOS VR Utility and/or the EOS VR Plug-in for Adobe Premiere Pro will make conversion of fisheye to equirectangular imagery possible.

It will also allows for processing and exporting footage at various resolutions and formats to help capture, convert, and process high-quality VR images and movies.