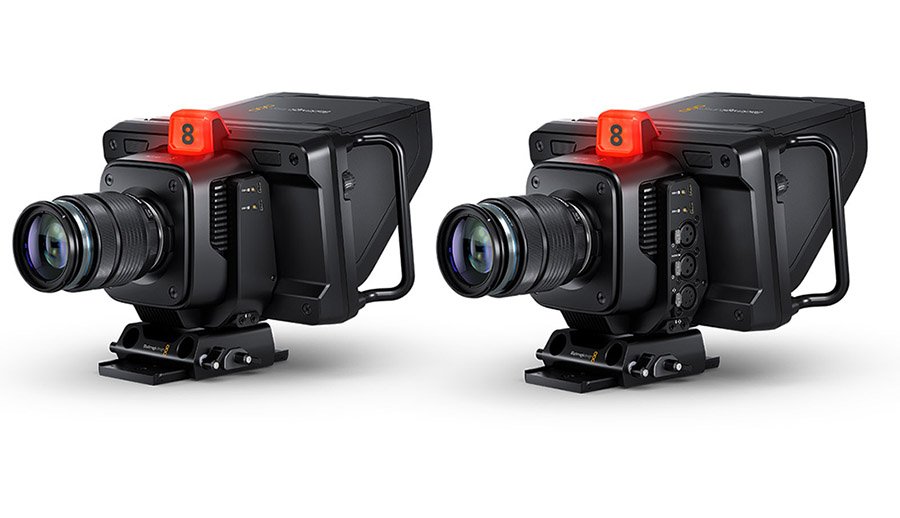 The new Micro Four Thirds (MFT) mount Blackmagic 4K Studio Cameras – the 4K Plus and 4K Pro – feature a compact and portable design that Blackmagic says “will help a wider range of live production customers who need cameras with professional features that are also fast to setup on location.”

Both cameras share most of the same design features, with the main difference being that the 4K Pro version includes 12G-SDI connections, professional XLR audio, a brighter HDR LCD, and 5 pin talkback and 10G Ethernet IP link.

Gain can be set from either the camera (4K Plus/Pro version), or remotely from a switcher using the SDI or Ethernet remote camera control (4K Pro version).

Both cameras also feature Blackmagic’s generation 5 colour science (providing the same imaging technology used in digital film cameras) and a built-in colour corrector that can also be controlled from a ATEM Mini video switcher over HDMI.

When on location, both cameras can also record 12-bit Blackmagic RAW to USB disks via the high speed USB-C expansion port without the need for a switcher.

The 7″ viewfinder features a large, bright display with side handles, touch screen operation with menus for camera settings as well as physical control knobs for brightness, contrast and focus peaking control.

The body itself is constructed with lightweight carbon fiber reinforced with polycarbonate and features a tripod mount with mounting plate allowing for faster set-up.

Thanks to the MFT lens mount users are able to mount a wide range of high quality photographic lenses.

The Focus demand and Zoom demand have USB-C connections allowing them to work with all Blackmagic Studio Camera 4K models and can be daisy chained to connect to the camera with a single USB connection.

Both models feature built-in shock and wind resistant microphones and a 3.5mm audio input, for connecting video camera microphones, as well as a 3.5mm headphone jack.

Because it is designed for broadcast workflows, the 4K Pro model also has 12G-SDI, 10GBASE-T Ethernet, talkback and balanced XLR audio inputs.

The built-in talkback connector on the 4K Pro supports standard 5 pin XLR broadcast headsets and allows the switcher operator to communicate with the camera operators directly during live events.

A separate Blackmagic Studio Converter handles all video conversions at the switcher end as well as adding power to the Ethernet cable eliminating the need to connect power to the camera.