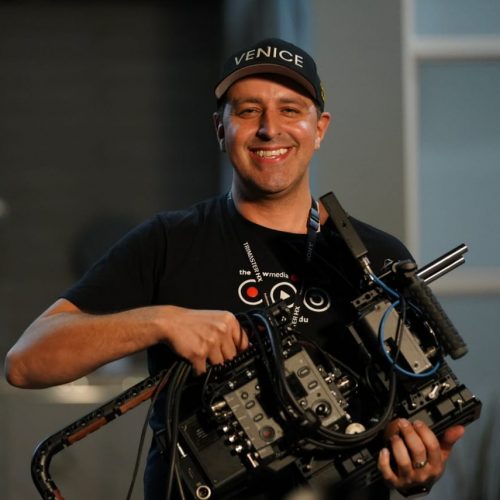 Sam Fares and Sony are thrilled to share all the exciting details of the brand new Sony VENICE 2 8K Digital Motion Picture Camera!

Featuring an impressive 16-stop dynamic range, internal recording onto a high-speed ASX card, internal recording formats up to ProRes 4K 4444 and 422, and an interchangeable sensor with updated usability and body design, the 8K Sony VENICE 2 Digital Motion Picture Camera is a step up for DPs, camera assistants, colorists, VR, and VFX departments thanks to its high-resolution capture and filmlike imagery.

Samuel Wilson Fares was born in Brazil and moved to the United States at 5 years old. Because of his multicultural experience, he speaks fluent English, Spanish, Portuguese and gets by with his Italian. His passion for photography and cinema began long before his career at Sony, when his father gave him his first VHS camera when he was just 10 years old. By 13 he was working with his middle school’s TV department shooting multi-camera programming for the state’s first “Video Tech” class with 3 studio cameras. He took that passion for production to film school where he graduated from the University of Wisconsin Madison and started making short films with his schoolmates where he was also President of Cineclub Latino. Six months before graduation however he was hired at a start-up software company called Sonic Foundry Inc., which would evolve into the Sony Vegas Pro video editing platform years later. Samuel was first hired at Sony Pictures in 2003 as international technical specialist to handle their new Digital Networks and software division. In 2005 he was promoted to Global Training Specialist and started traveling to trade shows and exhibitions in Europe, Canada, Latin America, and the United States. The job responsibilities were training the industry how to migrate from tape to new XDCAM optical disc cameras. In 2009, he was hired by Sony Latin America and promoted to Product Manager for Sony’s Cinealta, XDCAM, NXCAM product lines as well as workflow solutions. At Sony Latin America he was responsible for Mexico, Central & South America as well as the Caribbean. For the past 18 years working at Sony, he has worked and innovated with Sony camera design engineers in Japan and software engineers, while always educating and promoting Sony’s latest technologies to the industry. In 2019 Samuel joined Sony North America and became the manager of the Sony DMPC (Digital Media Production Center) in Los Angeles, California where he works with directors of photography, colorists and film schools to test, teach and demonstrate the latest Sony technologies. Sam has two young boys and a wonderful wife.

All Sessions by Samuel Fares